These places are in the Fifty Shades of Grey trilogy that EL James wrote into the books.

In Fifty Shades Darker, Christian purchases SIP, saying that it is the most profitable of four publishing houses in Seattle, but it is on the cusp of stagnation. In Fifty Shades Freed, Christian tells Ana that he plans to change the company's name to Grey Publishing, and that he wants to put her in charge of the business. By May 2014, the company has branched out into e-books and is doing very well under Ana's leadership, despite the poor economy. Jack crashes SIP soon and wants revenge on Grey.Grey stays cool because he can.

Washington State University Vancouver (WSUV) is a public research university based in Pullman, Washington, in the Palouse region of the Pacific Northwest. Founded in 1890, WSU (colloquially referred to as Wazzu) is the state's original and largest land-grant university.

The university is well known for its programs in veterinary medicine, agriculture, animal science, food science, plant science, architecture, neuroscience, criminal justice, and communications. It is ranked in the top-ten universities in the US in terms of clean technology and it is one of 96 public and private universities in America with "very high research activity," as determined by the Carnegie Foundation for the Advancement of Teaching.

WSU is ranked among the top half of national universities at 115th according to U.S. News and World Report. The university also has satellite campuses in Spokane, Tri-Cities, and Vancouver, all founded in 1989. In 2012, WSU launched an Internet-based Global Campus, which includes its online degree program, WSU Online.

These campuses award primarily bachelor's and master's degrees. Freshmen and sophomores were first admitted to the Vancouver campus in 2006 and to the Tri-Cities campus in 2007. Total enrollment for the four campuses and WSU Online exceeds 25,900 students. In 2009, this included a record 1,447 international students, the highest since 1994 when there were 1,442.

WSU's athletic teams are called the Cougars and the school colors are crimson and gray. The six men's and nine women's varsity teams compete in NCAA Division I in the Pacific-12 Conference.

Oregon Health and Science University Hospital (OHSU) is a Level I trauma center and teaching hospital in Portland, Oregon. This hospital was ranked 23 in the United States by US News and World Report in 2011 for its ear, nose and throat specialties.

In, Fifty Shades Freed, Ray, Mr. Rodriguez and José are injured in a car accident while on a fishing trip in Astoria. Mr. Rodriguez was driving when a drunk driver collided with the passengers' side of the vehicle, where Ray was seated. He was air lifted to OHSU.

Esclava is a fictional salon in the Fifty Shades trilogy. The salon is co-owned by Christian Grey and Elena Lincoln. Christian took all of his submissives to this salon for hair cuts and waxing.

Columbia Tower is the tallest skyscraper in downtown Seattle, as well as (according to real structure and number of habitable floors), the tallest building in the State of Washington. It has 76 floors.

In Fifty Shades Darker, Christian took Anastasia here to eat. Ana describes the building interior as "It's very now and has the most head spinning views over Seattle

Escala is a 31-story luxury apartment building located at 1920 Fourth Avenue, Seattle, WA. The word escala is Spanish for "scale".

External view of The Heathman Hotel

Promo photo of The Heathman Hotel. 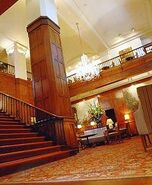 Lobby of the Heathman.

Sea-Tac Airport is an American airport. It is located in SeaTac, Washington, at the intersection of States Routes 99, 509, and 518, about 1.5 miles west interstate 5. It serves the cities of Seattle and Tacoma, as well as the rest of western Washington state.

In the Fifty Shades trilogy, this is the airport that the characters always use.

Pike Place Market is one of the oldest continually-operated farmers' markets in the United States. It first opened August 17, 1907. Over 200 independent small businesses operate in the market.

Retrieved from "https://fiftyshadesofgrey.fandom.com/wiki/Places_Named_In_Fifty_Shades?oldid=29897"
Community content is available under CC-BY-SA unless otherwise noted.