Eloise Mumford
Katherine Agnes "Kate" Kavanagh is Anastasia Steele's best friend and roommate. Kate gets into a relationship with Elliot Grey, who she meets at a bar while celebrating the end of finals week with Ana,José, and Levi.She is the girlfriend, fiancée and eventual wife of Elliot Grey.

Kate and Ana met as freshmen at Washington State University Vancouver (WSUV), and have been roommates for four years. Kate comes from a wealthy family; her father, whom Christian respects for his "shrewd" and "rational" business sense, is the founder of Kavanagh Media. She has an older brother named Ethan. Kate is an aspiring journalist and was the editor of WSUV's student newspaper. After graduating from WSUV, she has an internship with The Seattle Times. Kate gave the valedictorian speech at their graduation, implying that Kate's grades are as good as Ana's (who already had a 4.0 GPA).

Before the events of Fifty Shades of Grey, Kate badgers Christian's PR department for an interview. Christian is impressed with Kate's tenacity and agrees to meet with her. Kate comes down with the flu on the day of the interview and sends Anastasia to do the interview for her.Kate is one of the few people to point out when Christian's behavior around Ana seems controlling or dangerous, and she is the only person who ever directly confronts Christian. While Kate is initially supportive of Christian and Ana's relationship, she distrusts Grey after observed marked changes in Ana's demeanor. Christian and Kate intensely dislike each other, but act civil for Ana's sake.

Kate has more experience with sex and relationships than Ana at the start of Fifty Shades of Grey. Kate lost her virginity after her high school prom; she tells Ana that she was drunk, the sex was awful, and that she wasn't emotionally ready. Kate's only serious boyfriend has been Elliot Grey.

"This is to Be added at another time."

"But for now, the information is unanvailable."

"Sorry for the inconvenience."

In Fifty Shades Freed, Elliot proposes to Kate during their Aspen vacation in front of all their friends. Kate and Elliot eventually have a daughter named Ava Grey.

Kate is Ana's polar opposite. Ana is shy, doesn't care for shopping, and prefers to keep to herself, while Kate is outgoing, fashionable, and makes friends easily. Kate is also described as "vivacious", "confident" and "strong-willed". She's described as caring towards Ana.

Kate is an aspiring journalist, and has a tendency to question people relentlessly; Ana nicknames this the "Katherine Kavanagh Inquisition".

Kate is described as having strawberry-blonde hair, green eyes, and a curvaceous body. Ana says that Kate is so beautiful that it makes men "tongue-tied". 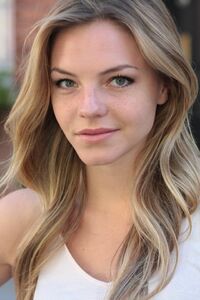 On November 22, 2013, it was announced that actress Eloise Mumford will be portraying Kate in the film version of Fifty Shades of Grey, which is slated for release on February 13, 2015.