Victor Rasuk
José Luis Rodriguez Jr. is a close friend of Anastasia Steele. The two met as lonely freshman at Washington State University Vancouver (WSUV), and recognized each other as "kindred spirits". Coincidentally, Jose's dad and Ana's dad served in the same Army unit. Ana sees José as "the brother [she] never had".

Through Ana's narration, we learn that:

Ana describes him as being the perfect guy in every way: good-looking, funny, nice, smart, conventional—but she admits to seeing him as nothing more than a friend.

Sensing José's long-standing attraction to Ana, Christian continues to view him as a romantic rival, despite Ana's dismissal of José's affections. He has a tense relationship with Christian because of this.

In Fifty Shades of Grey,  José, Ana, Kate, and Levi go out to a bar to celebrate Kate and Ana's graduation. José drunkenly attempts to kiss Ana but is stopped by Christian. José immediately feels intensely guilty for his behavior and apologizes to Ana. The two remain good friends for the remainder of the series.

In Fifty Shades Darker, José's has his first gallery show at The Portland Place Gallery. One of José's collections is comprised of stills of Ana in black and white. Christian purchases the entire set of photographs so that no one else can ogle them. José personally delivers the photos to Seattle and stays the night at Escala with Ana, but the mood of his visit is somber when Christian briefly goes missing.

In Fifty Shades Freed, José attends Ana's wedding and reminds her that he will always be there for her. Taking his promise a bit too literally, Ana calls him for photography advice at 3:00 AM Portland time while on her honeymoon. About two months later, Ray, José, and José Senior are hit by a drunk driver while on a fishing trip. José's injuries are minor and his father's injuries are slightly worse, but Ray's injuries are severe enough that he is in a coma for several days.

Although he appeared to have no issues attracting women during his gallery exhibit, José appears to still be single as of the Epilogue (set in May 2014). 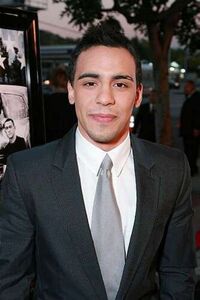 On October 31, 2013, it was announced that How to Make It in America actor Victor Rasuk will be portraying Jose in the film version of Fifty Shades of Grey, which is slated for release on February 13, 2015.