Ava Grey
Elliott Grey is the adoptive son of Carrick Grey and Dr. Grace Trevelyan-Grey, and elder brother to Christian Grey and Mia Grey. He is introduced in Fifty Shades of Grey when he accompanies his brother to pick up a drunk Anastasia Steele at a bar in Portland. There, he meets Kate Kavanagh, who becomes his girlfriend, fiancée and eventually his wife.

As of the Epilogue, he and Kate have a two-month old daughter named Ava Grey.  His trademark phrase is "Laters, baby."

He was born in Detroit, Michigan and was adopted by Grace and Carrick Grey. He was the first child that the Greys adopted. He and Christian did not get along when Christian was first adopted, but eventually grew closer.

After meeting Kate in Portland, they fall in love and get engaged in Fifty Shades Freed. By the end of the Epilogue, Elliott and Kate have a 2 month old daughter, Ava.

He first appeared in Fifty Shades of Grey, when Ana drunk dialed Christian while he was driving around Portland with Elliot. Christian wanted to pick Ana up at the bar because she was very drunk. While Christian rescued Ana, Elliot met Kate.

Throughout the series, he is in an exclusive relationship with Kate Kavanagh.

Elliot is described as tall, muscular, and wide-shouldered, with curly blonde hair and blue eyes. He is funny, affectionate, and laid-back. He appears to enjoy teasing people, especially his younger brother, Christian. When talking with him one-on-one in Aspen, Ana realizes that he and Christian both have a "Detroit bad-boy" streak. 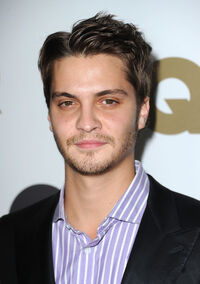 On October 25, 2013, E! News learned that True Blood actor Luke Grimes will portray Elliot in the film version of Fifty Shades of Grey, which is slated for release on February 13, 2015.