Elena entered Christian's life as a friend to his adoptive mother Dr. Grace Trevelyan Grey, and they began an affair when he was 15 years old.

Ana gives Elena the nickname Mrs. Robinson, a reference to the 1967 film The Graduate.

Christian has dinner with Elena while Ana is on vacation in Georgia. Elena convinces him to fly out to see Ana, hoping that the gesture would freak Ana out and make her want to end their relationship.

When Christian takes Ana to a salon owned by him and Mrs. Robinson, unexpectedly, she appears and that causes Ana to feel irritated and disturbed. Christian then went to meet Elena leaving behind Ana for a moment that makes her more agitated to the point that she leaves, and makes Christian promise not to take her there again.

At a charity masquerade party hosted by Christian's parents, Elena is a guest and realizes the relationship between Ana and Christian is serious. She tries to plant a seed of doubt in Ana, who refuses to give her any control. However, she's disturbed when Elena says that she saw Christian after Ana briefly broke up with him. Christian later denies this, saying he only spoke with her on the phone once. She later sends a note to Ana, signed "Mrs. Robinson", showing she knows about Ana's nickname, warning her that she'll be watching. Ana, though, refuses to let it affect her.

Elena shows up one night at Christian's apartment, unannounced, and is surprised to see Ana there. Christian, though, makes it clear that Ana stays, and Elena should call next time before coming. Elena agrees, though Ana is unconvinced she'll back off.

During Christian's birthday party at his parents' house, Elena tried to cozy up to Christian, but he kept Ana firmly next to him. Later, when he announces his and Ana's engagement, Ana is thrilled when she sees a shocked look on Elena's face.

Elena later corners her, claiming Ana will never be enough, and she doesn't understand their lifestyle. Ana retaliates, holding her ground, and says their relationship is none of Elena's business. When Elena calls Ana a "gold-digger", Ana finally loses it and throws a martini drink in her face. Christian enters at that point, and realizing what's happening, rails at Elena. Their argument is overheard by Grace, who throws Elena out after slapping her when she finds out Elena seduced Christian; she leaves, humiliated. Christian decides to end their business relationship by giving Elena full control of the salon.

When Christian finds out that Ana is pregnant, he storms out of the house. He later recalls to Ana what happened that night: after failing to find Dr. Flynn, he ended up at Elena's salon. She saw that Christian was upset and took him out for a drink. Elena attempted to make a move on him, only to be rejected. Finally realizing the depth of his feelings for Ana, she agreed to permanently part ways with Christian. Thinking of a now pregnant Ana and their unborn child, he admits to seeing, for the first time, the damage that Elena inflicted on him, albeit intentional or not.

Christian also reveals that when he was 21, Mr. Lincoln found out about Elena's affair with him. In retaliation for her disloyalty, Linc broke her left arm, cracked four of her ribs, and busted her jaw. Despite the severity of her injuries, Elena chose not to press charges against him. 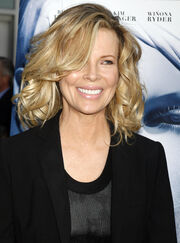 At first Elena appears to just care for Mr. Grey, but later on she shows her true colors.

Elena is described as a tall, elegant, sexy, regal platinum blonde. She is often wearing black and is very well-groomed. According to Ana, she appears to be in her late 30s or early 40s.