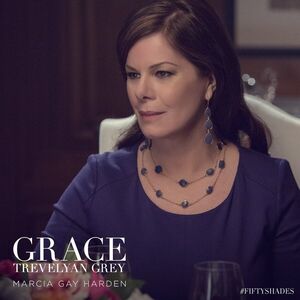 Dr. Grace Trevelyan Grey is the adoptive mother of Christian Grey, Mia Grey, and Elliot Grey. She is a pediatrician, and was the attending physician who treated four-year-old Christian after his biological mother committed suicide. She is described as having sandy-colored hair and hazel eyes.  Grace is married to Carrick Grey, and the two reside in Bellevue, Washington.

Her first appearance is at Christian's apartment in Escala, where she makes a surprise visit and nearly walks in on Christian and Ana . To Grace's knowledge, Christian had never been in a relationship before and she is delighted to meet Ana.

Grace was friends with Elena Lincoln for many years. She was unaware that her friend seduced Christian when he was fifteen years old until the closing events of Fifty Shades Darker at Christian's birthday .

On December 3, 2013 it was announced that Academy Award-winning actress Marcia Gay Harden would play Grace in the film adaptation of Fifty Shades of Grey, which is slated for release on February 13, 2015.8i

Retrieved from "https://fiftyshadesofgrey.fandom.com/wiki/Dr._Grace_Trevelyan_Grey?oldid=30341"
Community content is available under CC-BY-SA unless otherwise noted.