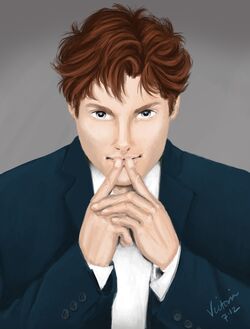 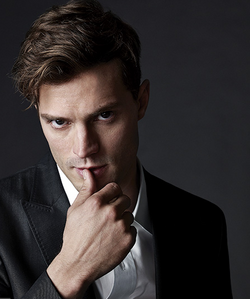 Christian Trevelyan Grey is the male protagonist of the trilogy, Fifty Shades of Grey. To the outside world, he appears to be a handsome and attractive young man in the business world. However, he has a "hidden life": he

Christian was born in the city of Detroit. His biological mother, Ella, was addicted to drugs and worked as a prostitute. Her pimp was extremely abusive to both her and Christian, often beating Cristian with a belt, hitting and kicking him, or putting out his cigarettes on his skin, leaving terrible scars and burn marks. When he was four years old, his mother overdosed and died; he was alone with her corpse for four days before they were discovered by police.

Christian continues to have nightmares of his childhood even well into adulthood, and often calls his biological mother "the crack whore." Dr. Grace Trevelyan Grey was the emergency room doctor on staff when the traumatized Christian was brought to the hospital by the police. She and her husband, Carrick Grey, adopted Christian into their family, but while they were waiting for the adoption paperwork to go through, he lived with a foster family for several months, which included a ten year old Jack Hyde.

The Greys moved to Seattle at some point during Christian's childhood, and Mia Grey was adopted shortly thereafter. This was a turning point for Christian: until Mia, Christian did not speak, and was wary of his adoptive older brother Elliot Grey.

As an adolescent, Christian had violent mood swings that often got him into fights, and he secretly drank and was addicted to alcohol. He hated all of the therapists that he was forced to meet with, because none of them were helping him. When he was fifteen years old, he took a landscaping job for his mother's friend Elena Lincoln.

Christian is tall, lean yet muscular, and broad-shouldered, with dark copper-colored hair and intense, bright gray eyes. He keeps in shape by kickboxing, running, and having sex. As quoted by Anastasia, "He is not merely good looking - he is the epitome of male beauty, breathtaking." Christian has an issue with self loathing and says that it is "just a pretty face" whenever he Is complimented on his appearance. He also believes that, because of his scars, lifestyle choices, and horrible childhood, he is only a "husk of a man" and has no heart.

Ana, who is unaccustomed to living the lifestyle of a Submissive, defies him frequently which both arouses and frustrates Christian in a way he is not used to. He soon realizes that he is developing feelings for Ana that he has never felt before, which spirals his life in ways he is not prepared for due to his past and nature.

After the disastrous end of his relationship with Ana, Christian finds himself broken by Ana leaving him. But soon after they're unable to deny their feelings for each other and the two rekindle their sensual affair. Christian, desperate to keep Ana in his life, wrestles with his inner demons.However, when someone from Christian's past pops back up in his life and threatens Ana, Christian must make choices fast.

When unworldly student Anastasia Steele first encountered the driven and dazzling young entrepreneur, Christian Grey, it sparked a sensual affair that changed both of their lives irrevocably. Shocked, intrigued, and, ultimately, repelled by Christian’s singular erotic tastes, Ana demands a deeper commitment. Determined to keep her, Christian agrees. Now, Ana and Christian have it all—love, passion, intimacy, wealth, and a world of possibilities for their future. But Ana knows that loving her Fifty Shades will not be easy, and that being together will pose challenges that neither of them would anticipate. Ana must somehow learn to share Christian’s opulent lifestyle without sacrificing her own identity. And Christian must overcome his compulsion to control as he wrestles with the demons of a tormented past. Just when it seems that their strength together will eclipse any obstacle; misfortune, malice, and fate conspire to make Ana’s deepest fears turn to reality. 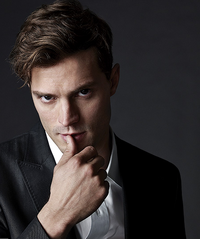 After months of rumors and speculation, EL James revealed via her twitter account on September 2, 2013 that Christian Grey would be played by Charlie Hunnam from Sons of Anarchy in the movie, slated for release on February 13, 2015.

However, on October 12, 2013, it was announced that Hunnam had dropped out of the film. He was replaced by Irish actor Jamie Dornan on October 23, 2013.